With over 45 years of experience in business, government, politics and media, including two tours of duty in the White House and service as an assistant to Presidents Ford and Reagan, Peter Roussel, is now an author, public speaker, university instructor and television and radio commentator based in Houston, Texas.

With over 45 years of experience in business, government, politics and media, including two tours of duty in the White House and service as an assistant to Presidents Ford and Reagan, Peter Roussel, is now an author, public speaker, university instructor and television and radio commentator based in Houston, Texas.

In 2009 he was appointed to the Philip G. Warner Endowed Chair at Sam Houston State University where he is a member of the faculty in the Department of Mass Communication.

From 1981-87 Mr. Roussel served in the White House under President Reagan as special assistant and deputy press secretary.  His duties as a spokesman for the President of the United States included briefings of the White House press corps and accompanying President Reagan on domestic and foreign trips, including summit meetings with Russian President Mikhail Gorbachev at Geneva in 1985 and Iceland in 1986. On one of his first days in the Reagan White House he went to Phoenix, Arizona to handle media relations and serve as press spokesman for the landmark historic nomination of Sandra Day O’Connor as Associate Justice of the United States Supreme Court.

His career in Washington began in 1969 when he was named press secretary to U.S. Congressman George H.W. Bush.  In 1970 he was campaign press secretary in Mr. Bush’s race for the U.S. Senate.  When Congressman Bush was named U.S. Ambassador to the United Nations in 1971, Mr. Roussel joined him there as his personal press officer, serving during a two-year period of headline-making events, including the admission of the People’s Republic of China.  In 1973 Ambassador Bush was appointed Chairman of the Republican National Committee and Mr. Roussel returned with him to Washington, continuing to serve as his personal press officer.

In 1974 Mr. Roussel assumed his first assignment at the White House as staff assistant to President Ford.  In 1976 he transferred to the President Ford Committee as special assistant to the campaign’s national director, James. A. Baker, III, and subsequently was communications director for Mr. Baker’s 1978 campaign for Attorney General of Texas.  In 1990 he was Communications Director for the Houston Economic Summit Host Committee.

Mr. Roussel has been an on-camera television commentator for abc13, the ABC-TV affiliate station in Houston (KTRK-TV), offering analysis on government and political affairs.  Other broadcast appearances include CNN, ABC World News, Charlie Rose Show and others.

He is the author of the novel, Ruffled Flourishes, published in 2009 by Bright Sky Press.  It draws on his experiences as a press spokesman at the White House and has been acclaimed by national media.  The late Jack Valenti, former President of the Motion Picture Association, said:  “It’s a superior piece of work, reeking of authenticity.”  Mr. Roussel has also written articles for the New York Times, Washington Post and other publications.  From 1996-2003 he was Executive Vice President and a managing partner of Neumann Roussel Public Relations.  His career in public relations and advertising began in 1966 with the firm of Rives, Dyke & Co. and has included professional experience with five firms in three cities.  From 2004-2008, he was a columnist for Intown magazine, writing a monthly column and serving as editor, June 2005-May 2008.

He graduated in 1965 from the University of Houston where he was honored in 1983 as a Distinguished Alumnus.  In 1986 he was selected to receive the first Distinguished Communications Alumnus Award presented by that university. 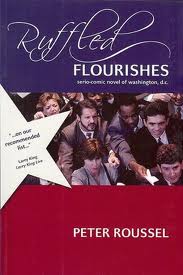