One of the gamen's all-time great guards, Clyde "The Glide" Drexler was known for his high-flying yet seemingly effortless swoops to the basket. Drexler twice led the Blazers to the NBA Finals. After almost a dozen seasons with the Portland Trail Blazers, Drexler left Portland with his name all over the franchise's record books. A

One of the gamen’s all-time great guards, Clyde “The Glide” Drexler was known for his high-flying yet seemingly effortless swoops to the basket. Drexler twice led the Blazers to the NBA Finals. After almost a dozen seasons with the Portland Trail Blazers, Drexler left Portland with his name all over the franchise’s record books. A perennial All-Star and a member of the 1992 U.S. Olympic Dream Team, Drexler twice led the Blazers to the NBA Finals. It wasn’t until he joined the Houston Rockets midway through his 12th campaign, however, that he finally earned a championship ring. It was fitting that Drexler achieved the ultimate NBA success while in Houston. A native of the city, he attended the University of Houston and starred on the “Phi Slamma Jamma” teams of the early 1980s. A forward in college, Drexler teamed with Hakeem Olajuwon and Larry Micheaux to form a front line that took the team on two straight trips to the NCAA Final Four. In his junior season Drexler averaged 15.9 points, 8.8 rebounds and 3.8 assists while shooting .536 from the floor.

After averaging 7.7 points as a rookie, he reeled off 10 straight seasons as one of the top scorers in the league. By his third year, 1985-86, he had become an All-Star, averaging 18.5 points and ranking third in the NBA in steals (2.63 per game) and 10th in assists (8.0 apg). In 1987-88 he placed fifth in the balloting for the NBA Most Valuable Player Award, after a season in which he averaged 27.0 points, 6.6 rebounds, 5.8 assists and 2.51 steals. In 1989 he set a Portland record by dunking on an 11-foot-1 basket. A quiet star in a city removed from intense media attention, Drexler didn’t always receive the acclaim that his stellar statistics should have earned him. As Portland developed into a contender, however, recognition of Drexler’s exploits followed. Behind Drexler, the explosive Blazers went to the NBA Finals in 1990 and 1992 and reached the Western Conference Finals in 1991. In 1989-90 Drexler averaged 23.3 points, 6.9 rebounds and 5.9 assists and made the All-NBA Third Team. In 1990-91 he earned All-NBA Second Team honors. The following season was one of Drexler’s most memorable. He averaged 25.0 points (fourth in the league), became the second player in Portland history to make the All-NBA First Team, finished second to Michael Jordan in MVP balloting and took the Blazers to the NBA Finals against Jordan and the Bulls. He then capped the season by earning a gold medal with the 1992 Dream Team at the Barcelona Olympics.

Hampered by injuries, Drexler’s production fell in the next two seasons (to 19.9 and 19.2 points per game, respectively), and by 1994-95 he was indicating that he was ready to leave Portland. At midseason the Blazers obliged by trading him to the Houston Rockets for Otis Thorpe. Drexler left Portland as the team’s all-time leader in scoring, games, minutes, field goals, free throws, rebounds and steals. The Houston trade reunited him with college teammate Olajuwon, and the two powered the Rockets from the sixth seed in the playoffs to the 1995 NBA Championship. In 1995-96, Drexler averaged 19.3 points for the Rockets in a season that was limited to 52 games due to shin and knee injuries. In 1996-97 he missed 19 games due to a stained hamstring (and one because of a suspension), and with the arrival of Charles Barkley his scoring average dipped to 18.0 ppg, his lowest since 1984-85. Midway through the 1997-98 season, Drexler announced plans to retire from the NBA effective at the end of the season so that he could take over the head coaching duties at his alma mater, the University of Houston. He went on to finish the season leading the Rockets in scoring (18.4 ppg) and assists (5.5 apg). He ended his illustrious NBA career as one of only three players in NBA history to top 20,000 points, 6,000 rebounds and 3,000 assists. Clyde will compete in the fourth season of ABC’s incredibly popular Dancing With the Stars, beginning March 19, 2007. ELENA GRINENKO, who returns for her second season, will be his partner. Clyde is very involved in the Houston community on both a business level and charitable level. He owns a restaurant in Houston, was the head coach at the University of Houston and has been involved in the front office of several NBA franchises. Hiis experience is very relevant to the topic he would speak on.

The Clyde Drexler Story
Clyde discusses the journey he took from becoming a NBA All Star to working on Dancing With The Stars. 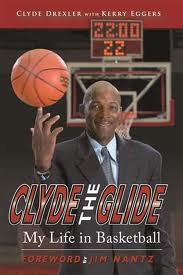