Two years out of college Bob Smiley got a call from a college friend, road manager for Clay Crosse, who offered him a job to emcee. Bob accepted and flew to Nashville to go on tour with Clay. That was how it all started. Bob later toured with Supertones, Mercy Me, Toby Mac, Audio A

16 years ago I did a stand up competition at my college (yes…I did go to college!). First prize was $500 which was 4 months rent for the room/closet I was living in at the time. So I did it and won… Not because I was good, but because everyone else was terrible. (Ask me about the guy with the sombrero!)

Anyway, two years later I graduated ant then got a call from a college friend of mine who saw me do that stand up competition. He was now road managing Clay Crosse and they needed a funny emcee as well as someone to handle the merch on the tour. He asked if I had a job and after we both had good laugh at that, I flew to Nashville to go on tour with Clay.

Clay liked me and kept me on touring with him through the summer. Then the Newsboys asked me if I’d go on tour with them and Third Day. It paid so I said yes. (I had good parents that taught me that lesson).

That turned out to be the number 1 tour that year and many youth leaders started asking me to come to their youth group and do a comedy show for them. My act had the word booger three times in it so I did really well.

I then toured with Supertones, Mercy Me, Toby Mac, Audio A, and a bunch of other bands who didn’t have the internet back then in order to find a better comic. That’s how it all started.

I also started writing humor articles for magazines. This was a dream come true because I could make people laugh, get a good christian message across and I didn’t have to get dressed or travel too far from my coffee pot. 5 years ago I started writing a column for Focus on the Family called “The adventure’s Of Average Boy”. Average boy became a hero to junior high kids everywhere so Focus then put out my first book…A comedy/devotional book called “Growing Up Super Average: The Adventure’s Of Average Boy”. It’s sold over 10,000 copies and since I don’t have that many family members I consider that a success!

I love doing my comedy shows because if I can make people feel better by laughing and then present the gospel of Jesus Christ then I feel like I have the best job in the world! (Yes, It is a job, Dad!) 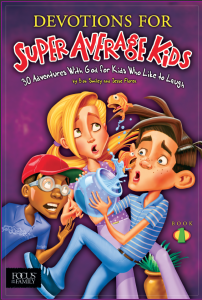