Diagnosed with a pediatric brain tumor, Patricia Walsh became blind at the age of five. As a teenager, she lost what little vision remained due to surgical complications, and the straight-A student began a downward spiral into depression and hopelessness.

But Walsh eventually had an epiphany: if she didn’t do something — and fast — she would doom herself to a life devoid of meaning. Today, she is an award-winning computer engineer and champion paratriathlete. In her book, Blind Ambition, Walsh both inspires and educates by relating her unforgettable personal story while detailing her proven Fuel / Fire / Blaze approach to achieving any goal:

Every path has obstacles, but you can overcome them. Apply a champion’s hard-earned lessons to achieve your goals and live a personally enriching and professionally rewarding life. All it takes is Blind Ambition.

See Patricia in action as she speaks for a collaborative effort between The Lighthouse for the Blind, Inc. Seattle International Film Festival (SIFF), and the C Different Foundation. She discusses her personal story and her goal of the Ironman Lake Placid.

For more information or to book Patricia Walsh, Austin Inspirational speaker, to speak at your event, click here. 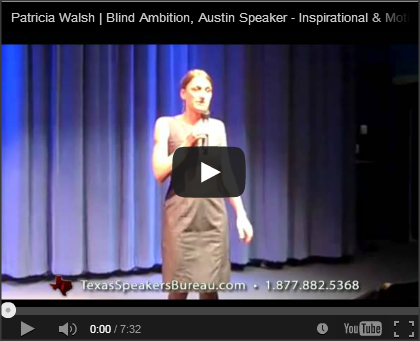 Patricia Walsh is a world champion triathlete and award-winning engineer. She has raced in over 12 marathons and ultra-marathons. When a friend first mentioned triathlons to her two years ago, she immediately signed up for the Ironman, before even owning a bike! Last year, she set the world record for blind athletes, blowing away previous female and male records by over 50 minutes. Patricia has a degree in computer science, becoming one of the first blind engineers at Microsoft. Patricia is the National champion for the Olympic distance and recently secured Bronze for the United States in the Short Course World Championship in Beijing, China 2011.Today Patricia aspires to represent her country in the 2012 & 2016 Olympics in both track & field and triathlon